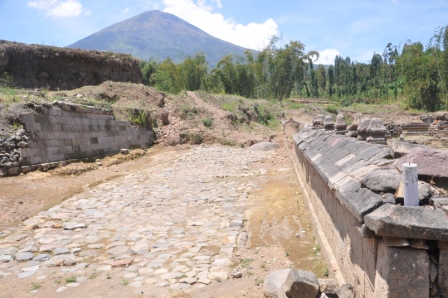 Liyangan archaeological site on the slope of Mount Sindoro in Temanggung regency, Central Java, has again proven its position as home to one of main archeological findings in Indonesia after archeologists from the Yogyakarta Archeology Agency found the fossilized remnants of staple foods, comprising maize and rice, still inside a bamboo basket at the site.

The archeologists said the finding indicated that Indonesia had long been part of an international agriculture network because maize was not endemic to Java and at the site they had also found many artifacts from other countries, especially China.

Head of the Yogyakarta Archeology Agency, Siswanto, said the findings proved that agricultural produce had been one of the primary commodities traded between Indonesia and its trade partners.

“The finding is also crucial to help us trace the history of food cultivation and technology in Indonesia, especially in Java,” said Siswanto, who spoke during the opening of the 2014 General Soedirman University (Unsoed) Fair in Purwokerto, recently.

During the excavation, the archeologists reportedly found fossilized maize and grains of rice in Liyangan, Purbosari village, Ngadirejo district, which is located 7.5 kilometers from the peak of Mt. Sindoro.

It was believed that the fossilized staple food grew between the eighth and tenth centuries, during the era of the ancient Mataram kingdom.

Siswanto said the excavation took place on a plot of land approximately one hectare in size. At the location, the archeologists also unearthed a temple and 40 ancient Chinese vases dating back to the Tang Dynasty.

Liyangan is a residential settlement in Temanggung at which archeologists had previously found many important archeological objects.

An earlier team of archeologists had also found fossilized grains of rice, indicating that food security in Java was well-managed during that time. (tah/ebf)(++++)